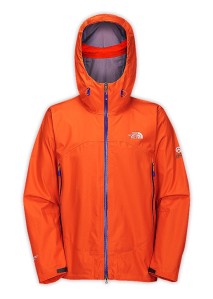 The weeks seem to be rolling past with ever increasing pace, and as they do we are slowly ticking things off our check list.  We have recently taken advantage of the great summer sales in the UK and have ordered Gore-tex jackets and Pants.  As always we researched long and hard before placing an order.  We had a couple of prerequisites  1. The jackets had to be Gore-tex (there are a lot of other technologies out there now, but from our research nothing still comes close to it)   2. they had to be light & pack small   3. not cost the earth.   4. We had to like the style.

We very quickly narrowed our search down to The North Face, and ended up ordering Summit Series jackets, these are aimed at the top end athletes.  So if there good enough for them, then they’re   good enough for us.  We decided to steer clear of all the jackets aimed at cyclists, and instead opted for a fell mountaineering waterproof shell.  The problem with the cycle specific jackets, they have no hoods, and when you cycling in heavy rain, we can speak from experience when we say you need a good articulating hood.

We were caught out once in a storm in France, we found out that our hoods weren’t big enough to go over the top of our helmets – the rain was so heavy the roads flooded and we had to cycle in our lowest gear and we could only just move as our front panniers were dragging in the water – by the time we had found a safe place to stop, and put or helmets on top of our hoods it was too late we were saturated!

So some people might think that it’s a little bit of over kill, but when you get caught out you would give anything to have the right equipment.  With the UK sales it actually worked out cheaper to by both jackets, than one full price in Australia!