Due to a number of reasons we ended up packed and ready to leave Christchurch with out ever cycling a single pedal stroke with our bike fully loaded. It was, therefore with a little hesitation that we jumped on the saddles and headed off into the unknown.

We had planned a short route to our first campsite as we had also never camped with the girls, and we had no idea how they would take to it all. As we expected the girls were amazing, they just thrive on anything new and exciting, and there is certainly a lot of new for them on this trip. The ride out of Christchurch was very simple and the tandem felt stable and well balanced. We could barely feel that we were pulling the Chariot despite the fact it adds over 40Kg to our bike!. As we hoped the girls had a little nap on the way to our first camp, and we arrived well before lunch, giving us plenty of time to play in the onsite park and explore the local shops. 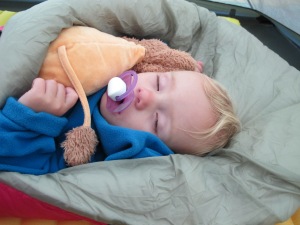 The girls are still on Sydney time which means that bedtime doesn’t roll around until gone 9pm local time. The girls hardly even noticed that their bedroom was now a bright yellow tipi, and they slipped straight into the camping lifestyle with ease.

Our route out of Christchurch was pretty simple as our campsite was right on one of the major trunk roads out of the city, we kept to the back streets and minor roads, and we were soon on the Old West Coast Road. Ever since our first pedal stoke in NZ the drivers have been nothing but courteous always giving us plenty of space and passing at a sensible speed, this coupled with virtually every road having a dedicated cycle way, or wide shoulder make the riding very easy indeed…. well that is until you have to cycle into one of NZ’s infamous norwester. As soon as we got onto the OWCR we were hit by a head wind so strong that we had to use our lowest gear to make any progress, and at times the gusts were so strong it was virtually impossible to make any headway.

After a day of battling the wind we were forced to change our route and head out of the wind. We had very little food with us, and we were planning to buy some on route, but we had no luck. Our map highlights several towns which we hoped would have a small store, but town after town turned out to be nothing more than an intersection with no trace of life! We were shattered from riding so hard into the wind, we had run out of water and we were miles away from any campsites or B&B’s and the girls were getting hungry.

We came to another supposed town on our map which once again turned out to just be a cross road. As we crossed the junction we saw a house on our left, we pulled in and knocked on the door. We learnt a little trick last time we were cycling in Europe, ask to fill the water bottles and when the owner comes back with the water ask if they know anywhere we could camp for the night “even just a small patch of grass would do” our plan worked a treat and Kim lead us into her manicured garden complete with a giant trampoline, sand box and slide. We couldn’t have been happier and we realised that we really needed to figure out where we were likely to come across shops etc along our planned route.

One thought on “The unexpected wanderings of a nomadic family.”