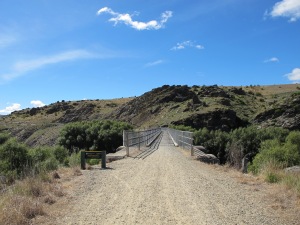 We’ve been on the road now for just under a month and the tiredness is finally catching up with us. After a break in Tekapo we got back on the bike with high spirits and excitement for the Otago Rail Trail. We had noticed that the roads were becoming busier and the hard shoulders non existent so we welcomed the opportunity to spend 150km on traffic free paths.

We’d decided that cycling over the Lindis Pass with the girls was way to ambitious so we caught a shuttle bus to Cromwell which was pretty damn frightening as the bus driver was a maniac driver and the roads were winding and narrow. Everyone we come in contact with always asks us if we are worried about the girls being in danger in the trailer and I must admit that I do worry quite a lot, just as any parent would but I don’t let the fear take over as I know we are also being as cautious as possible. However, that shuttle bus journey was absolutely petrifying. I was amazed that we all walked away intact, and it made me appreciate just how nice the slow pace of cycling really is.

Cromwell was our last stop before heading down to the beginning of the trail and we spent a nice afternoon there at the local swimming pool being silly with the girls. The next day we passed through Clyde which was a beautiful historic town alight with the buzz of the Otago Rail Trail and the thousands of tourists that pass through on a weekly basis. We thought the rail trail was going to be a bit of a break from the harder cycling that we’d been experiencing but somehow the head winds had followed us and combined with a gradual up hill and the trailer feeling like we were pulling it through quick sand, the first half really took its toll.

95% of people cycle the trail whilst enjoying a bit of luxury on the side. There are well set up companies that organise all transport & accommodation and even shuttle your bags everyday so you can ride the trail with no weight. Maybe next time we might take advantage of the shuttle service as everyone else road past us with ease even in the high winds. 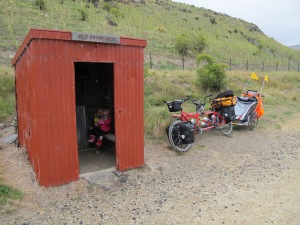 Things got a little too though one afternoon when Jay was suddenly finding it impossible to steer the bike. We both just put it down to tiredness and the wind but the next morning we discovered that the back wheel had loose spoke and we were lucky enough to be in a small town with an awesome bike shop. We were delayed another day as our internal hub makes it a little trickier to replace the spokes but it meant that we enjoyed a night in a cosy little cottage which we were all very grateful for. Once back on the trail we hit some shocking rainy weather and what should have been an easy down hill cycle turned out to be very difficult. Again, it forced us into another cute and cosy Hotel which also had divine food and lovely staff. 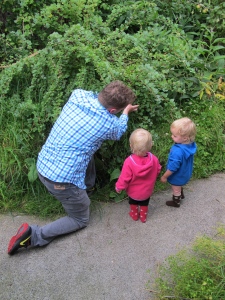 We’ve met loads of lovely people in the last couple of weeks and peoples generosity has been overwhelming. We met a family on the Rail Trail that have opened up their home to us in Dunedin and thats were we currently are, enjoying a bit of city life and recharging before the next leg of the adventure. The girls enjoyed their first cinema experience today along with their first Art Museum. Im enjoying eating Indian and Thai food and I think Jay is enjoying being near a decent bike shop to get our dodgy back wheel fixed up.

Our minds are forever wondering on to where we are heading to next so now we just have to make a plan on how to get over to the west coast again! The adventure continues, but now for some sleep….

One thought on “Rail Trail Trial”